About the CADWELL PARK RACE WEEKEND

The second BRSCC race meeting of 2020 takes place at Cadwell Park in Lincolnshire, a tight, twisty and challenging circuit that is always a favourite with drivers and ensures that overtaking a rival has to be earned on a circuit where passing can be difficult, but satisfying when achieved.

This meeting will see the first appearance of the season for many of the BRSCC’s most popular and successful championships. The first of which will be the Mazda MX-5 Championship for the Mk1 Mazda MX-5, which managed more than 50 drivers entered per meeting on average. The racing is always close and intense and usually sees the entry split into two groups to allow all drivers an equal amount of track time. With many of 2019’s top drivers making a return to the grid this year, it should be another fascinating spectacle once more.

Their Mazda racing counterparts in the MX-5 SuperCup for the Mk3 Mazda MX-5 will also be in action too, with a reinvigorated entry thanks to the reunification with the MX-5 Super Series. This has boosted the entry numbers once more and sees a new “Pro/ Club” class system to accommodate drivers of different experience and performance levels that competed in either the SuperCup or Super Series, depending on their preference and previous results. The MX-5 SuperCup has always been a championship that has thrown up incredible levels of drama, excitement and heart-stopping moments over the years. We’re certain that with all drivers back on one grid once again, it’ll be more of the same!

Caterham Motorsport kick off their 2020 campaign for four of their championships whilst also making a second stop for their newcomers in the Academy, who debuted recently at Oulton Park. For this event at Cadwell, the Roadsport and 270R Championships will share a grid, as will the 310Rs and newly renamed Caterham Seven UK Championship (formerly known as 420R) respectively. Caterham racing always provides fantastic action wherever it races and a rare visit to Cadwell Park is going be fascinating to watch.

There will be tin-top style action from the superb Hyperdrive ST-XR Challenge this weekend, contesting their second meeting of the season. Following on from a successful opening round at Oulton Park with a bumper grid of entries, including an influx of Fiesta ST150s into Class D to make it the best-supported class on the grid, the championship now heads to Cadwell in high spirits. This is a circuit which many of the drivers have been relishing the opportunity to race on and it will be fantastic to see the mix of Fiesta XR2s, Fiesta ST150s and Escort XR3is doing battle with one another on the many twists and turns that this Cadwell provides. If Oulton is anything to go by, the racing should be very exciting!

Also on the timetable will be the Fiesta Championship on the timetable, where both Fiesta ST and Zetec S models will be battling out on track together at the same time in a series that has stood the test of time since the 1980s and has helped to produce a number of touring car and GT stars over the years. Joining them in the same paddock will be racing stars of the future in the BRSCC Fiesta Junior Championship, a superb series for 14-17-year-old junior drivers to learn their craft on the way to moving up the motorsport ranks. A rejuvenated grid sees a large influx of new faces line up this season and they’re sure to enjoy themselves on a circuit that will test their abilities from the word go.

It’s also set to be a packed grid for one of the BRSCC’s newest sensations on their formulae portfolio, as we kick off the first full season for the Clubsport Trophy. This is a 45-minute, mini-endurance series with solo or two driver entries allowed and a mandatory pit stop. Last year’s initial two races produced sold-out grids and fantastic multi-class racing, so 2020’s amended four-meeting calendar should produce much of the same. Also set to line up in this series will be the much-anticipated debut of the all-new CityCar Cup, which has inspired many people within the UK motorsport scene since it was launched a few months ago. With Citroen C1s, Peugeot 107s and Toyota Aygos all permitted, being built on the same platform, these cars have been specified to ensure they feel and drive like race cars without breaking the bank. Watching them in racing action for the first time will be fantastic!

Also joining the paddock for this race weekend will be further sports car action from the Caterham Graduates Racing Club, who will join the meeting to race on Sunday with their Sigmax, Classics, 135 and 150 classes all set to contest the third weekend of their 2020 season after competing at Croft and Mallory Park beforehand. 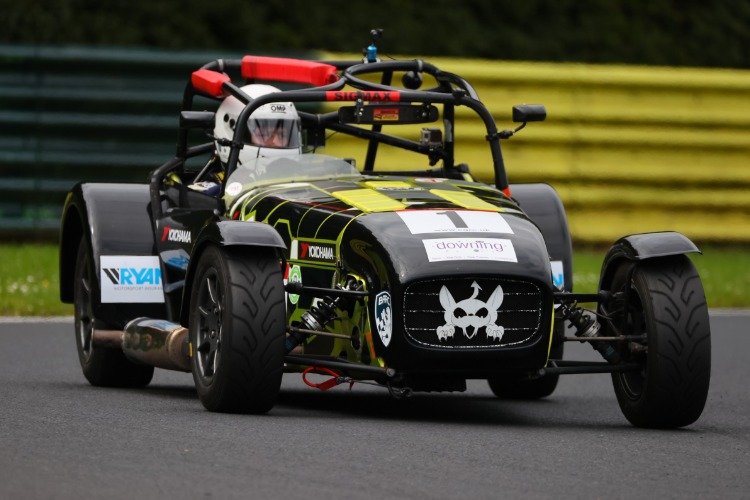