21 GT3s – the most since Donington Park eight years ago – and another 14 GT4 cars will tackle the event’s earliest running in its 11-year history, as well as the first points-and-a-half-paying endurance race of the season.

Round 3 of the championship’s 30th campaign also has plenty to live up to following a barnstorming season opener at Oulton Park on Easter Bank Holiday Weekend. The focus of those two hour-long sprints was very much on outright pace, but it will be strategy just as much as speed that decides this Sunday’s endurance race winners. Indeed, three driver changes must be completed at some point across the 180 minutes, although teams can choose when they take place without having to consider designated pit windows.

Due to ongoing judicial proceedings and based on the direction of Motorsport UK’s Legal Department Oulton Park’s Race 2 provisional top-three finishers (GT3 and GT4) will have their 20, 15 and 10-second Success Penalties suspended this Sunday. Instead, the extra time will be applied retrospectively and Silverstone’s result only finalised once RAM Racing’s Oulton Park appeal is heard by the National Court. The hearing, which will determine Oulton Park’s Race 2 result and, subsequently, those entries that must have Success Penalties retrospectively applied to their total Silverstone race time, cannot take place until the next available National Court date. SRO Motorsports Group is eagerly awaiting confirmation that this matter will be fully resolved before the provisional results of Oulton Park and Silverstone also impact Round 4 at Donington Park on May 28-29.

The names of Hunter Abbott and Martin Kodric were the latest to be engraved on the 1932 RAC Trophy last season after they dominated the 500 in their 2 Seas Motorsport Mercedes-AMG. Neither are competing this year, although their team and/or manufacturer has every chance of repeating the feat.

However, with Oulton’s Race 2 result still provisional it’s the opening weekend’s two standout entries, Balfe Motorsport’s Audi and #6 RAM Racing Mercedes-AMG, that must surely start as pre-race favourites at Silverstone. Adam Carroll’s battle against and victory over Jules Gounon put the icing on a bona fide British GT classic before Ian Loggie and Shaun Balfe ‘finished’ one-two on the road but were classified fifth and sixth on corrected times. These positions and the points apportioned for them remain unchanged.

Factory commitments elsewhere mean Gounon cannot attend this weekend. But his replacement, Callum Macleod, is no stranger to success with Loggie, RAM and Mercedes-AMG at Silverstone where the same combination triumphed in 2019.

Paddock Motorsport’s McLaren would have been an unlikely victory contender if its Oulton Park Race 2 win had triggered the usual 20-second Success Penalty. What’s more, Kelvin Fletcher – who starred en route to his and Martin Plowman’s first British GT triumph – is skipping Silverstone due to the imminent arrival of his twins. However, with the extra time now suspended and Beechdean AMR team owner Andrew Howard drafted in for a first British GT outing in something other than an Aston Martin since 2007, there’s every chance the same car will be at the sharp end once again.

Ditto Team Abba’s Mercedes-AMG, which provisionally finished second at Oulton but no longer has to serve its 15-second Success Penalty during this Sunday’s third and final driver change. Richard Neary’s scintillating opening stint at Silverstone last season ultimately came to naught but does suggest that he and his son Sam can’t be discounted this time around.

Enduro Motorsport’s Morgan Tillbrook and Marcus Clutton shouldn’t be too far away either after featuring at the front last time out, even if they left Oulton with a meagre four points to show for their efforts. Theirs is one of eight McLarens entered in the senior class – one shy of the record that already resides in Woking.

Lamborghini is also well represented, and it was WPI that left Oulton as the manufacturer’s best placed squad thanks to the sheer consistency of Michael Igoe and Phil Keen. They’re fourth behind Balfe/Carroll, Loggie/Gounon and Fletcher/Plowman in the early – and still provisional – drivers’ standings despite flying under the radar for much of British GT’s Easter weekend. They’re likely to be somewhere near the podium come Sunday afternoon, and not least because Huracans finished second and third last year.

Likewise 2021’s 500 winners 2 Seas who have two opportunities to go back-to-back this weekend. Their full-season Mercedes-AMG shared by James Cottingham and Lewis Williamson showed flashes of pace to match its striking livery on the opening weekend, while the series’ first-ever female senior class champion Flick Haigh returns with her 2018 title winning co-driver Jonny Adam for the first of their four appearances this term. Silverstone also marks Adam’s 97th British GT3 race but first aboard something other than an Aston Martin.

Haigh and Adam aren’t the only race-by-race entrants at Silverstone, either: Kevin Tse and Chris Froggatt’s Sky Tempesta Mercedes-AMG, which finished third at Oulton, the Optimum Motorsport McLaren featuring Nick Moss and Joe Osborne, and another 720S crewed by Garage 59’s Alex West and Marvin Kirchhoefer are also ineligible to score points.

Elsewhere, Assetto’s rebuilt Bentley makes its first British GT start after the team borrowed – and claimed a Silver-Am class win with – Paddock’s former chassis at Oulton. Fellow GT4 graduates Nick Halstead and Jamie Stanley will be eager to build on their senior class podium first time out with Fox, and Simon Watts finally gets his initial taste of British GT after Covid-19 prevented him from partnering James Kell at Team Rocket RJN on the opening weekend.

You’d also be foolish to discount Barwell whose Lamborghinis completed Silverstone’s podium behind 2 Seas last season. Adam Balon and Sandy Mitchell have a chance to repeat their second place, or go one better, this time around. 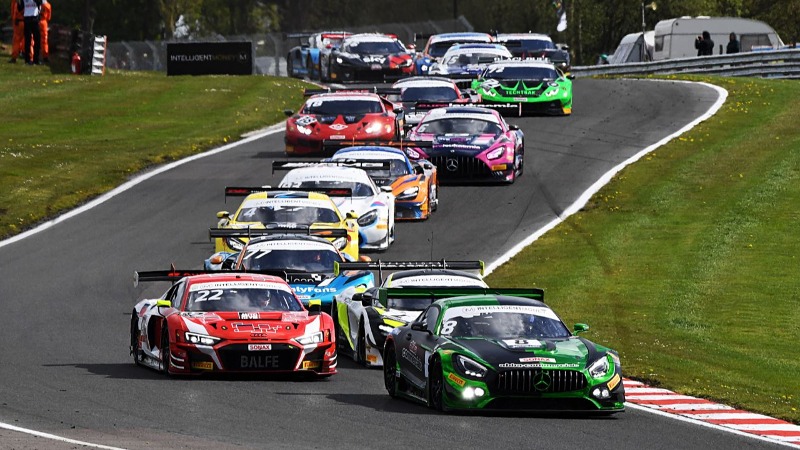 GT4: ANOTHER SURPRISE IN STORE?

Silverstone has a habit of producing unusual GT4 class winners, both in terms of drivers and manufacturers. Team Hard, Rob Barrable and Aaron Mason saved by far their best result, and to date only British GT victory, for the championship’s ‘big one’ in 2016, while five of the last six wins have been shared between Aston Martin, BMW, Mercedes-AMG, McLaren and Ginetta.

The same ratio applies to Pro-Am crews who have triumphed at Silverstone on all but one of the last half-dozen occasions. That might have something to do with the Silver Cup competitors having 14-second longer minimum pitstop times and an additional 25kg of ballast, which help to balance the natural performance difference.

Success Penalties have also played a role in that statistic but can’t be considered this Sunday due to their suspension. So who, then, starts as favourite on Sunday?

Well, reigning Pro-Am champions Matt Topham and Darren Turner clinched their maiden British GT4 wins at Silverstone last season and provisionally, at least, don’t have to consider the extra 20 seconds they would have served at their final pitstop after also winning last time out at Oulton. As such, Newbridge Motorsport’s Aston Martin is undoubtedly a prime contender.

The shorter minimum pitstop time and lighter weight also plays to the strengths of Team BRIT’s hand control-equipped McLaren shared by Bobby Trundley and Aaron Morgan who suffered a life changing motocross accident 15 years ago. He became the first paraplegic to contest a British GT round last time out at Oulton and could, given Pro-Am’s previous success at Silverstone, also become the first to feature on its overall podium this weekend.

Century’s one-off entry for David Holloway and Bradley Ellis, who raced the same Aston Martin together at Donington last year, can also be considered a victory contender. The latter won the 500’s GT4 class back in 2014.

And there’s also Motus One’s McLaren, which makes its first start of the season in the hands of debutant Ed McDermott and Silverstone specialist – as well as former GT4 lap record holder – Michael Broadhurst.

But what Silver Cup contenders lack in terms of speedy pitstops they more than make up for in sheer weight of numbers, with 10 of them hoping to bank British GT’s maximum 37.5 points for an endurance victory. And two usual suspects must no longer serve Success Penalties if they’re to do just that…

Steller’s victory and provisional third place at Oulton has given Richard Williams and Sennan Fielding an early championship lead, while Century’s BMW – a two-time winning combination at Silverstone – shared by Jack Brown and reigning champion Will Burns was classified second last time out. Their respective and still unconfirmed 10 and 15-second Success Penalties can wait for another day.

Picking a favourite from the remaining Silver Cup crews is nigh on impossible. But there are two who would make British GT history if they were to win…

At 16 years and 128 days old Seb Hopkins would become the series’ youngest-ever race winner if the Team Parker Porsche he shares with Jamie Orton took the chequered flag first on Sunday, while R Racing’s Jamie Day and Josh Miller would comfortably break the record for youngest crew in terms of combined age if they stood atop the podium. Do so and Miller – at 16 years and 155 days – would also break Sandy Mitchell’s long-standing youngest-ever benchmark across all classes.

Elsewhere, Paddock’s Moh Ritson and Ashley Marshall will be motivated to bounce back from their tough opening weekend at Oulton, Chris Salkeld and Tom Rawlings have the tools to succeed in Century’s second BMW, and Assetto’s Ginetta – featuring Freddie Tomlinson and Joe Wheeler – could be a dark horse after demonstrating its potential at Silverstone 11 months ago. 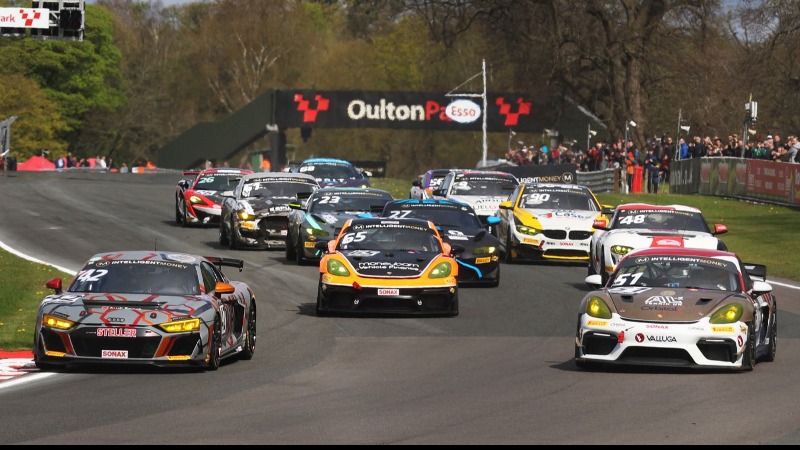