Two-time defending W Series champion Jamie Chadwick got her title defence off to the perfect start this past weekend in Miami, as she drove to two race wins at the new Miami International Autodrome to take maximum points ahead of her rivals.

Beitske Visser (Sirin Racing W Series Team, 27, NED) – runner-up to Jamie in the inaugural W Series season in 2019 – went from 12th on the grid to fourth. Abbi Pulling (Racing X, 19, UK) was fifth, one place above her team-mate Bruna Tomaselli (Racing X, 24, BRA) who progressed from 14th on the grid to sixth.

Nerea secured her maiden W Series pole position in qualifying on Saturday morning, but the Spaniard couldn’t capitalise. At a baking hot Miami International Autodrome – where the track temperature soared past 50 degrees Celsius – both Nerea and Alice Powell (Click2Drive Bristol Street Motors Racing W Series Team, 29, UK), who started third, were slow away from the starting grid, allowing Jamie to take the lead at the start.

Alice was relegated to the rear of the field and, while attempting to make up places on lap one, hit the wall at Turn 8 to bring out the safety car. Marta and Abbie Eaton (Scuderia W, 30, UK) were the biggest winners from those early exchanges, making up six and seven places respectively to move into the top six.

As Alice’s car was lifted away and repairs to the barriers continued, the race was red-flagged and the cars returned to the pit-lane. There were 18 minutes of the 30-minutes plus one lap race remaining when the action resumed behind the safety car, and 15 minutes left when it pulled into the pits again.

At the restart, Emma was right on Jamie’s tail on the run to Turn 1, but the Briton held on. Behind them, Marta passed team-mate Fabienne Wohlwend (CortDAO Racing W Series Team, 24, LIE) for third place with a late-braking move up the inside on the entry to Turn 11. Emma made another attempt to pass Jamie at the end of the long straight at Turn 17, but was denied again as Jamie led by half a second with a third of the race to go.

With eight minutes left, Abbie and Fabienne made contact at Turn 4, and moments later Emma passed Jamie for the lead at Turn 11 before the safety car was deployed for a second time to allow Abbie’s and Fabienne’s cars to be removed.

The clock had run down to zero when the safety car exited to leave a one-lap shootout to the finish. Emma ran wide on the exit of Turn 1 allowing Jamie to regain the lead and Marta to move up to second. Emma tried to fight back past Marta around the outside at Turn 17, but the pair made contact and, as Emma spun, Marta held on to second place and Jessica moved up to third. 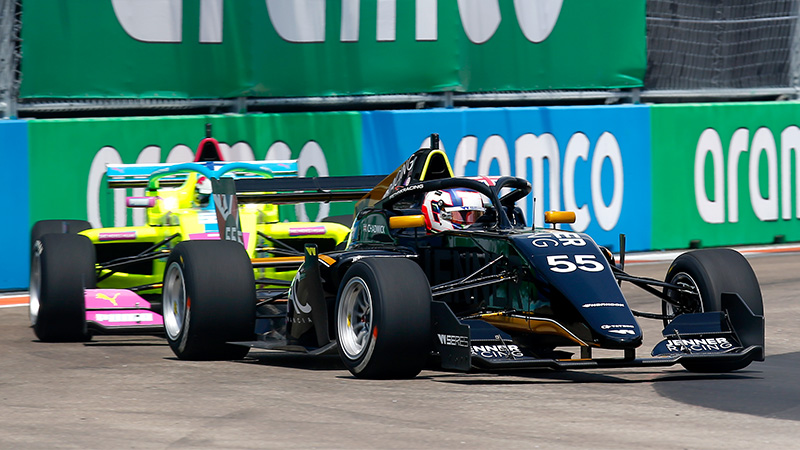 Defending champion Jamie Chadwick (Jenner Racing, 23, UK) completed a perfect weekend at W Series Miami presented by Hard Rock by backing up her win in Saturday’s first race with a dominant lights-to-flag victory in race two of the 2022 season-opening double-header.

The drivers’ second-best time during qualifying on Saturday had set the grid for race two, and the front row from race one was reversed as Jamie started from pole position and Nerea from second. Fabienne Wohlwend (CortDAO Racing W Series Team, 24, LIE) started 10th after receiving a five-place grid penalty for causing a collision in race one.

The top two retained their starting positions as they exited Turn 1, but Nerea was under pressure from Emma who started third. The Finn went up to second with a move on the inside at the entry to Turn 11, but went deep on the exit allowing Nerea to instantly regain the place. Jamie led by just under a second at the end of lap one, by which time the only changes in the top 10 saw Sarah, Fabienne and Marta move up one place each as Abbi dropped from eighth on the grid to 11th.

With five minutes gone, Emma attempted the same move on Nerea and made it stick this time to go second. Three minutes later, Bruna Tomaselli (Racing X, 24, BRA) pitted with a front-right puncture, relegating her to the rear of the field. With a third of the race gone, Nerea overtook Emma for second, but Emma fought back along the start-finish straight and re-took the position at Turn 1. Up ahead, Jamie set the fastest lap of the race to extend her lead to almost two seconds.

The battle for second continued on the next lap, and Nerea regained her starting position by overtaking Emma at Turn 11. With just under half of the 30-minutes plus one lap race gone, Alice briefly moved into the podium positions by going late on the brakes into Turn 1, but Emma dipped back under Alice on the exit to stay in third. That put Alice under pressure from Belen, but the former held on as the pair went wheel-to-wheel for several corners in the middle sector of the lap.

Behind that battle, Sarah passed Beitske for sixth place at Turn 1 with 14 minutes remaining. Jamie led by 1.6 seconds at the halfway stage, but Nerea set the fastest lap to halve the leader’s advantage as they entered the final 10 minutes of the race.

Abbi was the quickest driver on track and urged by her engineer over the radio to make a move on Beitske for seventh place, which she duly did at Turn 11 with seven minutes to go. Sarah was next up the road for Abbi and, five minutes later, she overtook her for sixth at Turn 17 before holding off a fightback from her compatriot at Turn 1 on the next lap, and Beitske followed Abbi past Sarah for seventh later a few corners later.

On the penultimate lap, Alice and Emma made contact at Turn 17, sending Emma spinning and down to fifth behind Belen. Alice suffered front-wing damage but nursed the car home in third, although the stewards were investigating that incident after the race.

Jamie upped her pace to regain a buffer of almost two seconds to Nerea going into the final lap, and the champion remained error-free to complete a perfect weekend. 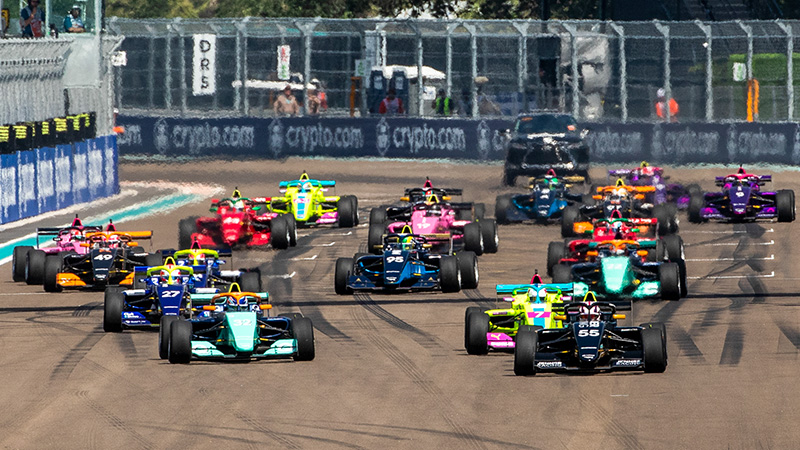