Oulton Park in Cheshire becomes the setting for the first race meeting of the season for the amended BRSCC 2020 race weekend calendar, with the TCR UK Championship & Dunlop Touring Car Trophy set to headline a packed day of racing that accommodates a variety of racing categories to suit all tastes.

Due to the pause on all racing activity due to the coronavirus pandemic, the cars and stars of TCR UK and Dunlop Touring Car Trophy will be out in force for the first time this season, as an excellent mixture of TCR, NGTC, S2000 and BTC spec cars will dice it out on track together. The beautiful flowing nature of the Oulton Park International circuit means these cars will be truly put through their paces and two exceptional races should take place as a result. Their regular support championship the Volkswagen Racing Cup are also making a welcome return with their mix of VW Golfs, Sciroccos and other VAG Group machines, acting as a feeder series for those who wish to make a step up into touring car racing in the near future.

The day will become something of a saloon car racing feast as there’s plenty of racing action to accompany the main event. Two exceptional championships that are simply unmissable are the Civic Cup and Nankang Tyre BMW Compact Cup. The Civics bring a field full of Honda Civic Type Rs that look and sound like mini touring cars in their own right, while the Compact Cup provides incredible action courtesy of a phalanx of rear-wheel drive BMW 3 Series Compacts! Considering that one or two drivers that have competed in touring cars have made their way through championships like these, it’s proof that both are brilliant proving grounds for tin-top talent!

If that wasn’t enough, there’s also regional racing to enjoy from the ST-XR Challenge, a championship mainly centered around venues such as Oulton Park and Anglesey and featuring a great mix of Ford XR models of varying generations. With the grid mostly comprising of Fiestas and Escorts, they are another championship that’s blossoming at the moment and definitely a series you should watch on the day.

Don’t think we’ve forgotten any single-seater lovers, either – you’re in for a treat with the both the Avon Tyres National Formula Ford Championship and Northern & Super Classic Formula Ford Championship combining onto one grid together, with a host of young talented drivers competing against one another for a chance to become champion and potentially earn themselves a special British F4 prize at the end of the season!

And just to add one last additional flavour into the mix, this meeting will also serve as the first competitive event for the 2020 Caterham Academy, a championship dedicated to novice drivers competing in their first-ever season of racing. All drivers will have completed their ARDS tests together and also got their first chance to drive their cars on track at the group test day, meaning that they should be raring to go for some exciting one-make sports car action! 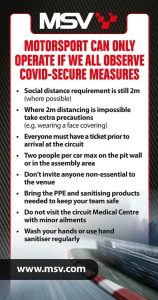