It’s been three years since that famous combination last aligned. But with coronavirus restrictions now lifted and lockdowns eased the series’ 30th campaign can begin on its traditional date in Cheshire this weekend.

And with a 31-car entry comprising 18 GT3s and 13 GT4s assembled for Monday’s two hour-long sprint races, British GT’s Easter weekend at Oulton should be well worth the 36-month wait.

Not since 2014 has British GT featured such a large GT3 entry at its opening event, while the total across both classes for rounds one and two was last eclipsed before the pandemic.

So many new entries, as well as the absence of reigning champions Leo Machitski and Dennis Lind, points to several established crews enjoying an early advantage. But that might also be tempered somewhat by the introduction of Pirelli’s new P Zero DHF slick tyre, which equips both classes for the first time.

So, where to begin?

Well, there are still reigning class champions on the grid, both of which have undergone changes over the winter. First up there’s reigning two-time Pro-Am title winner Ian Loggie who remains with RAM Racing but is joined this weekend by Mercedes-AMG factory star Jules Gounon. He’ll share Pro duties with Callum Macleod throughout 2022.

There’s also Stewart and Lewis Proctor who won last year’s Silver-Am crown but have switched from Balfe Motorsport to Greystone GT. They’re hoping to defend the title, as well as challenge for overall success, in a class now featuring six full-season entries and seven at Oulton.
GT3’s entry includes just one former overall champion – Sandy Mitchell – who once again joins Adam Balon in Barwell’s sole Lamborghini. They were title contenders last year and will surely start amongst the favourites at Oulton where the team and/or Huracan has won in each of the last six campaigns.

The last of those was taken by another unchanged combination: WPI Motorsport’s Michael Igoe and Phil Keen. The latter remains British GT’s winningest driver but is still searching for his first GT3 title. Surely he’ll never have a better opportunity than in 2022…

Other established pairings hoping to become regular title contenders this year include Team Abba Racing’s Sam and Richard Neary who scored a breakthrough win at Donington last season, Oulton’s 2021 pole winner Kelvin Fletcher and his co-driver Martin Plowman whose Paddock Motorsport team have switched to McLaren over the winter, and Enduro’s Morgan Tillbrook and Marcus Clutton who won the final race of 2021.

Another of last year’s Oulton Park pole winners, Scott Malvern, again pilots the class’ only Porsche with long-time Team Parker co-driver Nick Jones, while Mia Flewitt and Euan Hankey – who raced a 720S GT3 together in several events last season – make their first start in Cheshire since winning the GT4 class there two years ago. Their 7TSIX McLaren squad is one of several that are new to British GT this season.

Then there’s 2 Seas, who won on its only outing at Silverstone last term. James Cottingham, who is also back following a handful of appearances with RAM, joins former single-seater ace but British GT debutant Lewis Williamson in the Mercedes-AMG.

Several GT4 graduates – both drivers and teams – are also stepping up this year. Mark Sansom is joined by former GT4 champion Will Tregurtha aboard Assetto Motorsport’s new Bentley, and Nick Halstead and Jamie Stanley reprise their partnership with Fox, albeit after switching from McLaren’s 570S to the 720S.

Balfe Motorsport helped the Proctors clinch 2021’s Silver-Am title but have switched focus and manufacturer for team owner Shaun Balfe’s first tilt at the overall crown since finishing third three seasons ago. He and former A1GP champion Adam Carroll – who scored his only British GT win to date at Oulton back in 2016 – raced the previous generation R8 together in GT Open last season and should be a threat from the word ‘go’ this weekend.

And what of the new and hotly anticipated M4 GT3 that Century Motorsport debuts at Oulton? Betty Chen – British GT’s first-ever Taiwanese driver – will be unknown to many of even the most seasoned GT racing aficionados, but she does have some knowledge of the previous generation M6 from her short time in China GT.

There’s also one race-by-race GT3 entry this weekend: Sky Tempesta Racing’s Mercedes-AMG. The team and its founder Chris Froggatt have won the Fanatec GT World Challenge Europe Powered by AWS Pro-Am title for the past two years, while Kevin Tse was victorious on his British GT debut – incidentally with a Mercedes-AMG at Oulton – last September. 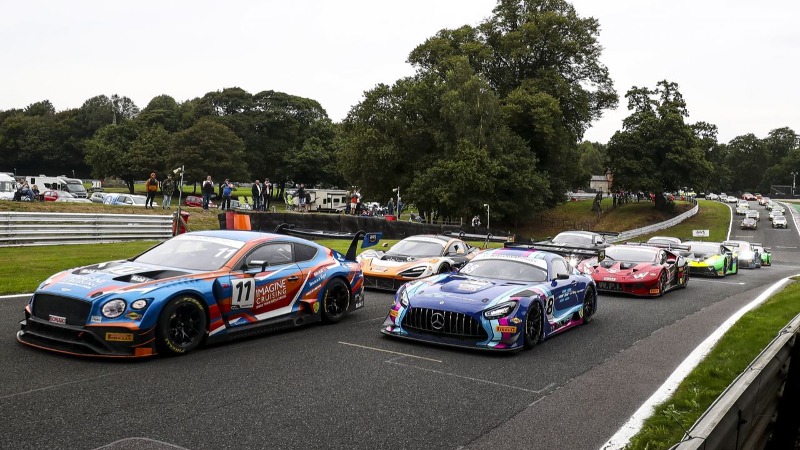 Unlike the senior class, GT4’s entry features a reigning overall champion – Will Burns – who will hope to begin his title defence in style this weekend. What’s more, and ominously for the rest of the grid, he’s sticking with the same team and car that propelled him to the 2021 drivers’ crown: Century Motorsport and BMW.

Sure, he’s now sharing the M4 with Jack Brown following Gus Burton’s Porsche Carrera Cup GB switch, but that shouldn’t hinder Burns’ chances at the same circuit as where he clinched the title with a race to spare last September.

He’s joined on the entry by another driver hoping to become British GT’s first two-time overall GT4 champion. Ross Wylie returns to the class for the first time since his 2014 title run after signing for series debutants Valluga Racing, one of two teams racing Porsche’s new 718 Cayman GT4 RS Clubsport. Can the Scot, assisted by team owner/driver and former British GT race winner Benji Hetherington, pick up where he left off eight years ago?

Newbridge’s unchanged reigning Pro-Am champions Matt Topham and Darren Turner are bound to be a threat, too, and especially at Oulton where they both claimed poles and won the opening race last year.

Likewise Academy’s Matt Cowley who has won races in each of his two seasons and finished second overall last year thanks to an incredible championship run-in. The Ford Mustang he shares with Canadian Marco Signoretti was also a winner on its British GT debut at Oulton in 2019.

Two drivers making significant history of their own are Aaron Morgan and Bobby Trundley who will become the first disabled pairing to contest a British GT race this weekend. Their Team BRIT McLaren has been specially adapted and homologated with hand controls that allow Morgan – a paraplegic – to compete. He and Trundley, who was diagnosed with severe autism as a child, have previously raced together in Britcar but this will be their first outing in the squad’s new 570S.

There’s further variety at Assetto Motorsport whose G56 is piloted by two teenage sons of famous fathers. Freddie Tomlinson’s dad, Lawrence, owns the LNT Group, which includes Ginetta, while Peter Wheeler – the father of Joe – oversaw TVR from 1981 until 2004. The iconic Blackpool-based manufacturer’s Tuscan T400Rs won British GT races at Oulton in 2003 and ’04, while Ginetta holds the championship’s record for most GT4 victories.

At a combined 33 years and 14 days R Racing’s Josh Miller and Jamie Day will become the youngest driver crew to ever contest a British GT race, beating the previous benchmark held by Will Tregurtha and Stuart Middleton by approximately 18 months. They would also take the 2017 champions’ record for youngest combined winners, while victory at Oulton would see Miller become British GT’s youngest-ever race winner in any class – an accolade currently held by Sandy Mitchell.

But the Cayman isn’t the only ‘new’ car on show this season. The Ekris M4 might ostensibly be a BMW but it was racing in Europe before the factory developed its own GT4 car. However, Inspire Racing’s example featuring Richard Marsh and Gareth Howell becomes the first to contest a British GT race.

There’s further variety in the shape of Toyota Gazoo Racing UK’s Supra, which includes promising Ginetta Junior graduate Tom Edgar.
Steller’s Audi, shared by the familiar pairing of Sennan Fielding and Richard Williams, is the ninth and final manufacturer represented in GT4 this year. Expect this pairing to feature somewhere near the sharp end.

Century enjoyed a bumper 2021 season in which it won all three titles available. And, as well as Burns, it’s counting on further continuity in the shape of Chris Salkeld who returns for a second season with the M4 and new recruit Tom Rawlings.

Last season the latter shared GT Cup’s GT4 runner-up spot with now former team-mate Moh Ritson who remains with Paddock for his GT4 graduation. He shares the familiar 570S with 2021’s Spa winner Ashley Marshall, who also benefits from prior experience of racing the same car.

Motus One’s McLaren and the second of Steller’s Audis, both of which featured on 2022’s full-season list, are expected to appear for the first time at Silverstone next month. 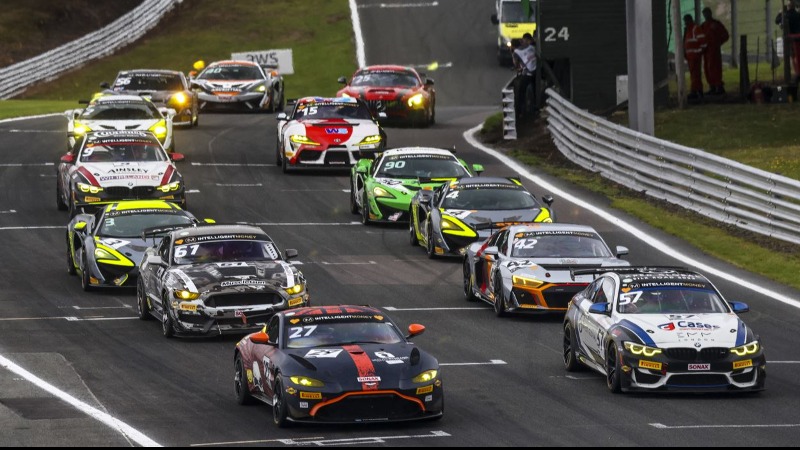