About the FUN CUP RACE DAY

For the first time in a while we’re racing on just one day of competition at Snetterton with our East Anglian Centre, but it’s a day set to be filled with excellent endurance and tin-top saloon car action from start to finish.

The delayed start to the new Fun Cup Championship season finally gets going here in Norfolk, with two races on the same day – a one hour sprint to shake off the race rust followed by the typical four-hour endurance test. The FunCup is seen as one of the most enjoyable and cost-effective ways of going endurance racing at allowing teams consisting of two to six drivers battling it out on track in races that typically see drivers racing flat out from start to finish. All teams run the same silhouette body shape over a single-seater chassis powered by a tuned Audi/ VW engine, ensuring that race wins are determined on car setup and driver ability alone. Always a popular attraction whenever they’re at a race meeting, the new season of FunCup is due to kick off in fine fashion.

Joining them at this meeting will be three series from the Classic & Modern Motorsport Club’s Southern division. The Super Saloons are just that with a field that’s set to be chock full of souped-up racers, including BMWs of all shapes and sizes, many Fords including those driven by the likes of Rod Birley and Malcolm Wise, fast hot hatches and even extreme machines like an ex-V8 Supercars Holden Commodore driven by Alex Sidwell. The Intermarques Silhouettes bring National Hotrod-style racing to the big circuits with spaceframe chassis sporting a variety of different body shapes including Audi TTs, Vauxhall Tigras, Mercedes SLKs and VW Corrados. Finally the Tin Tops provide a plethora of Honda Civics, Ford Fiestas, MINIs, Renault Clios and Citroen Saxos, all enjoying some healthy competition amongst each other! 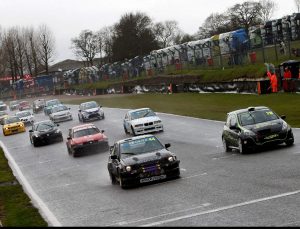