Two new winners were crowned in the Avon Tyres National Formula Ford Championship at their most recent rounds at Knockhill in Scotland, as both Colin Queen and Lucas Romanek managed to take the fight to erstwhile points leader Jordan Dempsey in a bid to mark themselves as his main rivals for the season. The day’s racing would see the regular National contenders share a grid with the local favourites from the Scottish Formula Ford Championship, which marked the start of their 2022 campaign alongside the National’s second meeting after the Silverstone opener.

After topping practice early on in the morning, double Silverstone winner Dempsey went on to secure pole position in qualifying from Queen and Romanek, while Morgan Quinn looked in great form with 4th fastest ahead of Jamie Sharp and guest driver Andrew Rackstraw, last year’s Investchem Formula 1600 champion in South Africa making his UK racing debut with Kevin Mills Racing. The rest of the top 10 was completed by Shawn Rashid, Andre Lafond, Ben Cochran and Megan Gilkes.

Dempsey held his lead from pole while Romanek put Queen under pressure early on before he came under threat from Jamie Sharp in 4th, but these battles were put on hold when Rackstraw found the gravel at Clark Corner. On the restart, Dempsey tried to escape and leave Queen in the clutches of Sharp who was now 3rd, but Colin managed to break away and catch Dempsey in a handful of laps as the leading quartet circled together.

Soon, Dempsey and Queen broke away in their own private battle with the American all over the Irishman as the race entered its final stages. Moving onto the final lap, Queen had the setup for a move and pounced at Scotsman Corner to steal the lead away with just corners to go. Queen resisted any final retaliation from Dempsey to claim his first National Formula Ford win for Ammonite Motorsport with Jordan settling for 2nd place by just four tenths of a second. Romanek did indeed defend third from Sharp to claim his second podium of the season, while Team DOLAN’s Quinn and Cochran drove strong to complete the top six. 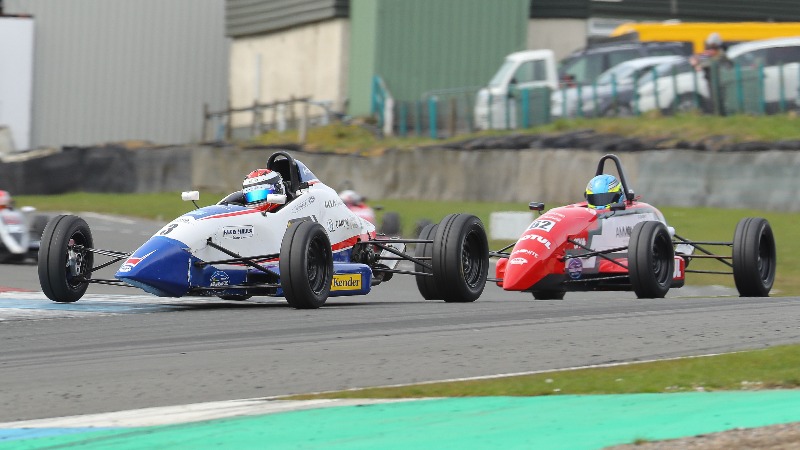 Queen then picked up where he’d only just left off in the second race, leading from pole ahead of Dempsey while Sharp quickly took 3rd ahead of Romanek and Morgan Quinn. The story with the top two was much the same again with Queen trying to pull away and Dempsey in close attention. This time it was the Spectrum that appeared to have the better pace and after a few minutes, Dempsey attacked down the inside at the hairpin. Both cars ended up fighting for the same piece of tarmac and as Queen tried to defend on corner exit, the two cars tangled and ended up sliding off onto the inside grass.

Both drivers quickly rejoined the circuit seemingly unscathed, but now this had put Sharp into the lead ahead of Romanek, Quinn and a charging Andre Lafond who was in contention in 4th. Another frantic battle for 1st took place, but soon Sharp found himself spinning at the exit of the hairpin after interlocking wheels with Romanek, who managed to hold his ground and complete a move around the outside in the process to take the lead.

Romanek used the clear track around him to instantly pull out a comfortable gap in the lead and ended up never being headed for the rest of the race, charging on to become the second first-time winner of the day, his Oldfield Motorsport Van Diemen serving him well. Morgan Quinn was also pressure-free as he claimed on his best Formula Ford results to date with 2nd, but it was the scrap for 3rd in the closing stages that provided the most tension. Lafond did a superb job holding off Cochran for several laps, but eventually Cochran secured the pass at Clark corner and wasted no time in gapping the Ammonite pair behind, as Queen has closed in after his earlier contact, with Lafond and he completing the top five in 4th and 5th respectively.

Next on the National Formula Ford calendar, the championship now moves only slightly to the south as Croft in North Yorkshire plays host on May 14/15. 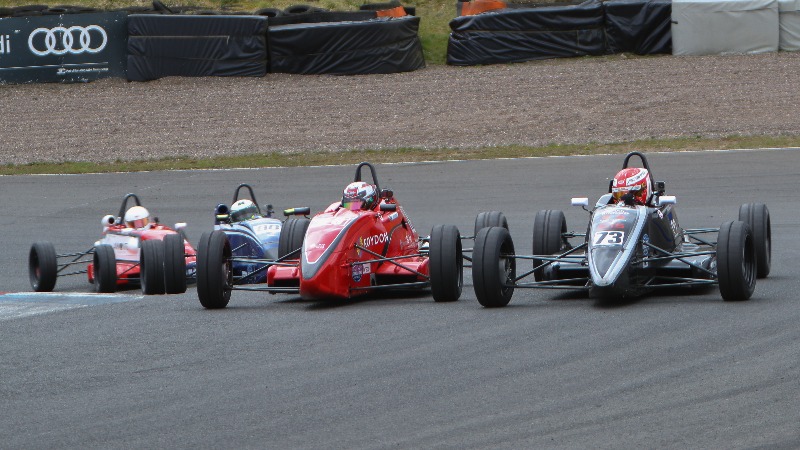