One of the world's greatest and most competitive single-seater competitions and the centrepiece of the BRSCC season!

About the BRSCC Formula Ford Festival

**2022 BRSCC FORMULA FORD FESTIVAL ENTRIES ARE NOW OPEN!** – Find out how to enter the 51st running of the BRSCC Formula Ford Festival at Brands Hatch on October 22-23 2022 via the following link to get instructions on how to get started – https://racehub.brscc.co.uk/ 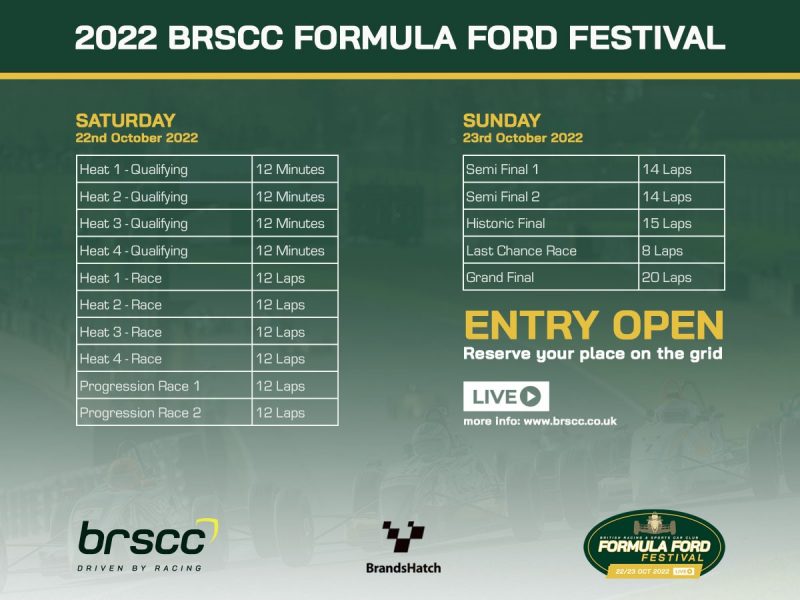 The BRSCC Formula Ford Festival is one of the world’s greatest motorsport competitions and an event that has stood the test of time for decades, with the 2022 edition set to be its 51st running and the 47th to do so at Brands Hatch in Kent. It’s seen many a great and lauded driver pass through on their way to great achievements in their racing careers and anyone who has been lucky enough to win is automatically recognised as a talented racer.

The event began back in 1972 as an idea formed by the then BRSCC Executive Director Peter Browning along with Barry Mercer, Jim Russell and Peter Copper, who all agreed that after five years of consistent growth from Formula Ford since its inception in 1967, that a dedicated meeting just for Formula Fords was required. Originally codenamed the “Formula Ford Knockout”, the name was altered to that which we’ve known and loved to this day – the Formula Ford Festival and with some 200 cars anticipated to turn up to Snetterton in Norfolk and a £2,000 prize pot to be won (the equivalent of just over £23,000 in today’s money!), the first Festival was a roaring success, with Ian Taylor its first victor. The Festival remained the same for the next three years until it was decided to switch venues for 1976, choosing instead to take place at Formula Ford’s spiritual home of Brands Hatch, scene of the category’s first-ever race in its birth year of 1967. The Indy circuit was chosen as the layout and that’s how it’s remained to the present day. The Festival truly was the first kn0ck-out style junior single-seater race event of its kind!

The format of the Festival is simple – drivers are allocated into heats which take place on the Saturday of the event with qualifying taking place for each in the morning. Those who automatically make it through to Sunday’s races head into one of two semi-finals, where the competition gets even more intense. Limited automatic qualifying spots mean the racing usually gets faster and more frantic than the day before, but those who are successful get their chance to write their name into the history books by lining up for the all-important Grand Final on Sunday afternoon. Those who don’t make it through first time in the semi-finals get another shot at progressing thanks to the Last Chance Race, a quick sprint over just a handful of laps to determine the last qualifiers that will start at the back of the Grand Final grid. Usually the most contemporary and modern cars dominate the head of the field, but the Festival welcomes any and all Kent-engined chassis to race and those who enter with older machinery can still battle for their own glory courtesy of a dedicated Historic Final. Therefore, the event ensures that whatever the vintage of car you bring, you’ll always have something to race for!

Many a famous name has chosen the Festival to announce themselves onto the world stage of motorsport, with the most notable winners including 2009 Formula 1 World Champion Jenson Button, race winners Mark Webber, Eddie Irvine and Johnny Herbert, as well as fellow F1 stars Anthony Davidson, Roberto Moreno, Roland Ratzenberger and more. Plus, it’s not just those who win that are known for competing in this event, as many more stars have progressed to great things despite not winning the Festival, including world champions Michael Schumacher, Mika Hakkinen, Nigel Mansell and Kimi Raikkonen, plus the likes of Alain Menu, Derek Warwick, Mark Blundell, Allan McNish, David Coulthard, Dan Wheldon, Danica Patrick and even Carlos Sainz Sr! While recent winners haven’t quite moved on to reach the dizzying heights of F1, they have taken their talents to British F3, British GT, ELMS and even stateside on the Road to Indy – proof that the Festival is still an important competition for young drivers to win if they wish to prove their skills.

Off the back of a memorable and history-making 50th Festival in 2021, 2022 looks set to buck the Formula Ford trend and could have the potential to be even bigger and better!

The “Road to the Festival” begins again once more – get ready, as entries for the 51st BRSCC Formula… Read more »

After 49 previous editions full of action, drama and memorable moments, the 50th Formula Ford Festival in October of… Read more »

Ladies and gentlemen, the moment has finally arrived – it’s Festival season! This year, the BRSCC is all set… Read more »